Two years ago, I broke ground on automated intake solution for small law firms. As I combed through domain names and tossed around ideas, I came across ClientSherpa. It felt perfect.

“Sherpa” evoked the idea of a dedicated, knowledgeable and gritty companion helping to reach an important goal. A noble profession.

And that’s what I always envisioned the software to be. A companion that takes on the heavy lifting of onboarding new clients.

Over the next two years, I received exactly zero negative feedback (about the name anyways.)

That is until about two weeks ago.

I sat down with my coffee to read my email and get ready for the day. At the top of my inbox was a rather innocent looking customer email. I opened it and started reading.

It was almost apologetic in tone.

One of the author’s employees had asked her to let me know that ClientSherpa was deeply offensive to her.

“Wait, what?” I thought as I stopped mid-sip, immediately googling “sherpa misappropriation.” 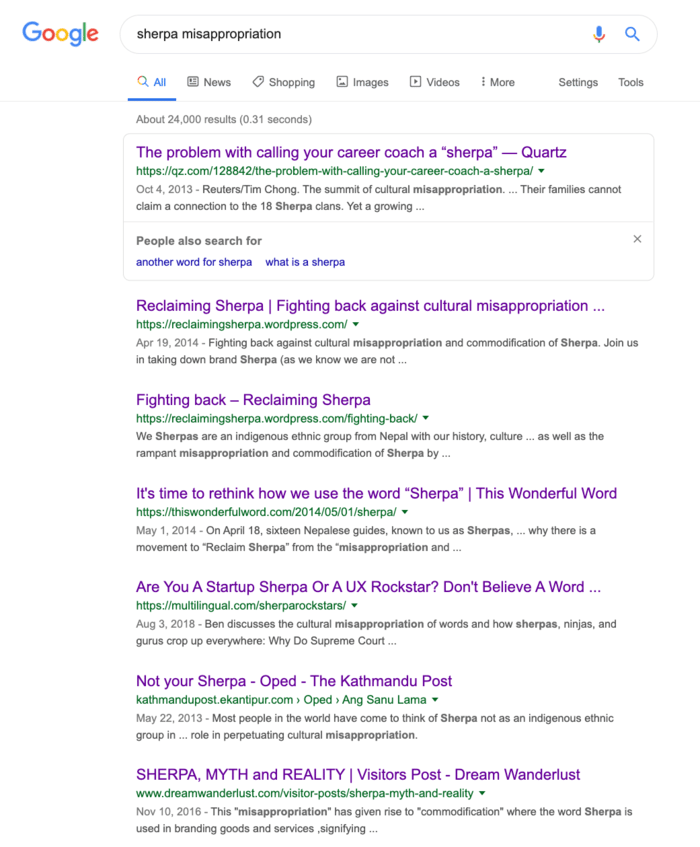 I’ll summarize, though if this is new to you like it was to me, I would highly recommend digging into some of these posts.

Sherpa isn’t a profession. Sherpa refers to an ethnic group of indigenous clans from Tibet. A group with a rich history doing the dangerous work that props up the region’s economy.

While Sherpas became famous in the Western world for their service to climbers, they are no more synonymous with a porter (the actual profession) than say, Americans are to cowboys.

In my Western bubble, this sadly didn’t even occur to me. The idea of a Sherpa being a profession was so ingrained that I didn’t even stop to question it.

I had messed up.

This is 100% on me. I should’ve done more research than a quick trademark and domain lookup. I should’ve paid more attention to the fact that, when coming up with branding, I explicitly instructed the illustrator to avoid anything that could be construed as stereotypically Tibetan. I should’ve looked one layer deeper at WHY I felt the need to clarify that. Perhaps I would’ve avoided all of this.

Time to make a decision #

My gut said I needed to change the name. And I wish I could say that was that and I followed my convictions immediately. But changing the name of a business is not trivial, and I wanted to be sure that I was’t overreacting.

I reached out to some Slack groups for founders to get their opinions. I even reached out to founders of other businesses that used the word Sherpa in their name to see how they handled it.

And while I didn’t have any connections with actual Sherpas, it’s clear from the articles in that Google search that they found it offensive, and really that’s the most important thing.

It appeared that I had three options.

I could keep the name and just not address it at all; chalk it up to someone being overly sensitive. After all, I’d gone nearly two years without so much as a peep about it.

I don’t know if folks were just trying to soften the blow that I’d done a racism, but there was a lot of feedback that I should just ignore it, that the world had become far too PC and that I shouldn’t worry about it.

I generally disagree with the statement that you can be too PC. The English language is diverse enough to communicate in a way that avoids devaluing the experiences of other humans. It just requires that we put some thought into our words and consider the lived experience of someone other than ourselves. I’m not sure you can have too much of that in the world.

And so acknowledging that this is a problem, what else could I do?

I could keep the name and explain why I chose Sherpa, and hope that paying lip-service to being inspired by the Sherpa culture was enough to appease those that took offense.

It would kick the can down the road to a point where I might be in a better position to rebrand in the case the the backlash ever got to be problematic.

It’s cynical, but it’s the path most would expect a corporation to take given the circumstances.

Except I didn’t start a company to be a cynical corporation. I built a company so that I could live according to my own values, and in the meantime I’d be running the software equivalent of the Notre Dame Fighting Irish, Cleveland Indians, or Washington Redskins.

One comment from a mentor helped clarify the situation so well that I can’t help but quote it here:

“What is the connection between Sherpa (the ethnic group, because now you know) and your business? When you chose that name, you didn’t know. Fair. But now you do. So what do you do? What claim can you make to defend that choice now beyond, "I thought this was a job and when I found out it was an ethnic group I decided to keep the name anyway.” What would you do if it was another group? Would you charge forward with a business called “ClientItalian” “ClientCherokee” “ClientAshkenazi”?”

Change it now. The cost will never be lower in terms of having brand or SEO equity to lose. And as that mentor pointed out, you really only get one chance to do the right thing. After that, it’s just varying degrees of cynical damage control.

Besides, how many folks were out there, uncomfortable with the name of my business that I never heard from? How many potential opportunities never presented themselves because I chose an insensitive name? I’ll never know, but from the feedback I’ve received as part of this process, I’m pretty sure the answer isn’t “zero.”

Epilogue - The Silence of Dissent #

I’m not exaggerating when I say that I got zero negative feedback on the name.

It wasn’t until I actively solicited feedback on the name, that I started to hear phrases like “I just assumed you weren’t a ‘woke’ company.” And as a few of those voices popped up, the tone of the feedback completely switched. From ~75% saying not to give in to the sensitivity of one individual, to ~75% saying I was absolutely making the right call in changing the name.

That’s the reason that I wrote this and opened myself up to the additional feedback I’m sure to receive.

When pushed on matters of political correctness, there’s a palpable tendency to avoid being seen as the person that’s softening their stance in response to moral objection. Until someone else in the crowd “virtue-signals” that it is in fact OK, it felt like no one wanted to be “that guy” in the crowd that might bring everyone down by saying a line had been crossed.

And so yes, I am here, virtue-signaling for as many people as I can, that when mistakes are made, it’s ok and necessary to confront it. I hope I’ve owned my mistake, and by sharing this experience I hope you can avoid the same mistakes I’ve made.

What if you had a decade to live?

At some point in your life someone has probably asked you “what would you do if you had one day to live?” At which point you wrack your brain coming up with all of those little experiences you would want to pack into those 24 hours. You’... Continue →